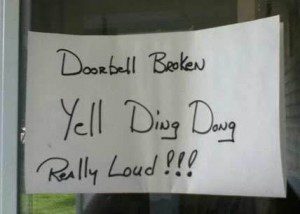 If you’re like me, electrical problems freak you right out.  If a switch doesn’t work or outlet is broken, I’m super scared to go near it, much less try to fix it on my own.  But it turns out, it may not be too difficult or scary after all.  I found some great tips to help you with one common home issue – a broken doorbell.  No more missing the pizza guy after this!

A doorbell has three parts:  the switch, the bell, and a transformer between them.  If you are pushing the button and don’t hear anything, check the switch’s wire connections.  Here’s the part where I generally bail:  try touching the two wires together; if the bell rings, then you need to replace the switch.  There’s actually no danger of getting electrocuted at this point, as those wires are supposed to go together.

Next, check the bell.  Clean it, inspect the wiring, and make sure the hammer isn’t bent away from the bell or jammed by dirt.  Those problems are an easy fix and also not too scary.  Even I can clean dirt off or bend the hammer back so it will strike the bell.  If you still don’t hear that welcoming ring-a-ling, then the transformer is likely the problem.  To fix that, you’ll need an electrician.  Better safe than sorry on that one.

I’ve never been electrocuted in my house, but I have been electrocuted before.  When I was fifteen, I worked at McDonalds after school. One day I was assembling McRib sandwiches in the back, when the metal vat holding the McRib sauce shorted out.  I happened to have one hand on a stack of metal trays and the other on the metal counter holding the vat.  All I can remember is not being able to move, or even think.  Thankfully, the short only lasted a second or two.  That’s one experience I don’t ever need to have again!  The moral of the story is to be careful around electrical repairs, but you don’t need to be terrified of them.  I’m fine, although I’ve never cared much for the McRib sandwich.  Until next time!