When I first met with Matt and Emily they were mainly interested in the market value of their home. They needed this number so they could decide if upgrading to more square footage made sense. So after touring they’re home and admiring all the upgrades they had done (Matt and Emily are very much do it yourselfers) we went over the numbers, and to they’re surprise, they were very much in their favor. They looked at each other and said, “well I guess if we found the perfect house, at a decent price, with more square footage and in this neighborhood, we would move.” 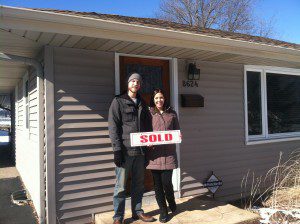 After setting Matt and Emily up on an MLS search I thought it would be quite a while before they actually found the perfect home (aka able to leave they’re meticulously upgraded house). But a couple weeks later Matt called me and said we found it! 4 bed, 2 bath, updated rambler with 4 car garage in the same neighborhood. After realizing Matt found it on Zillow and that it was actually already pending was not good for everyone’s spirits. “Well Eric, if you find us a house exactly like that one, we will move.”

A couple months later literally 4 blocks down the street a 4 bed, 2 bath, 4 car, with new family room addition, unfinished lower level for another bedroom, entertainment room, and Matt’s studio! The house from heaven! But after the start of negotiations, we quickly realized the house from heaven had to be worked for. Long story short, contingent offer: rejected, non-contingent offer: countered, countered, countered again, inspection: amendment, counter, another amendment … let’s just say some things are worth working for!

Congratulations to Holmes, they earned it!