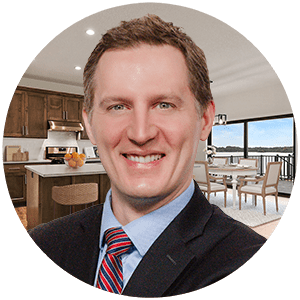 “My main objective when I first meet with a client is simple; I want to get to know them. After listening to clients’ concerns and understanding their needs only then do we start discussing the market. I believe establishing this foundation of trust and honesty not only leads to a successful sale but also a lasting working relationship.”

Eric was raised on a farm in a small town in Northern Michigan. In addition to farming, his father also worked as a machinist and his mother was a school bus driver. From an early age Eric learned the meaning of hard work. Typical summers were spent working on his Dad’s farm, then riding his pedal bike to other farms in the neighborhood to earn money. “Then if I finished in time, I would ride my bike to the lake in the evening. Work then play is the Wozniak way. I was in the best shape of my life,” says Eric. After high school, Eric attended Ferris State University earning a Bachelors of Science in Manufacturing Engineering in 2002, married his best friend Breann in 2006, earned a MBA with a concentration in Finance and Entrepreneurship from the University of Minnesota in 2012, and cherished the birth of his daughter Willa in April 2014. With over 13 years of experience in engineering and operations management at Parker Hannifin, Eric found the courage to leave corporate America and has been selling houses ever since. “I truly feel like I’ve found the career I’ve been searching for. Real Estate is the perfect blend of finance, entrepreneurship, and helping people. I love it!” Eric joined the Kerby & Cristina team in 2014.

My dream job would be... If I could go back and do one thing before Real Estate I would have enlisted in the military. I have the utmost respect for our men and women in uniform and like to think I could have been a Navy Seal Sniper, but like we said, DREAM job, not a possible job!

My first job was... Working on neighborhood farms.

When I'm not working you'll find me... Working out, reading nonfiction, researching investments and camping.

My favorite vacation spot is... Anywhere in the Caribbean, Bahamas, Dominican Republic, Mexico – clearly making up for too many summers on the farm.

The best "unknown" restaurant I've been to is... Cardinal Tavern