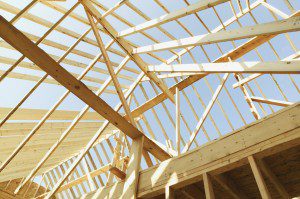 NEW YORK (CNNMoney) — The housing recovery blossomed in September, as the pace of home building surged to a four-year high, according to a government report issued Wednesday.

Builders started work at an annual pace of 872,000 homes last month, up 15% from the pace in August. They also filed for permits to build homes at an annual rate of 894,000, up 11.6% from the previous month. Both readings were the best since the summer of 2008, before the meltdown in financial markets that caused home lending and building to freeze up.

But mortgage rates are now near record lows, and the Federal Reserve’s decision to buy $40 billion in mortgages every month is likely to keep rates low for the foreseeable future. The low mortgage rates, coupled with affordable housing prices and a drop in unemployment have helped to restart home sales.

Foreclosures have fallen to a five-year low, reducing the supply of distressed homes available on the market. And four years of depressed levels of home building have cut the supply of new homes on the market to nearly record lows, according to a separate government report.

All these factors have helped to lift home prices and get builders back building again. And while there had been signs of improvement in the housing market in readings leading up to Wednesday’s report, the improvement in these latest numbers were far greater than expected.

“We’ve been seeing consistent improvement in housing for some time, but this is a big jump though,” said Anika Khan, senior economist with Wells Fargo Securities.

Economists surveyed by Briefing.com had forecast that starts would rise to a 768,000 rate, while permits would edge up to an 815,000 rate.

Khan said that part of the increase was driven by a 25% jump in the start of apartment buildings of five or more units. That number can be fairly volatile and there could be a retreat in that reading next month, she said.

But the 11% rise in starts for single-family homes is more impressive, and is a sign of an improvement in the underlying housing market, Khan said.

“We’re clearly seeing overall improvement in sales,” she said. “I don’t necessarily think this report is a one-month jump.”

On Tuesday, the National Association of Home Builders said its October survey of members found confidence among builders at the highest level since 2006. However, their enthusiasm looks good mostly in comparison to the past four years — only 20% of the builders surveyed characterized current business conditions as good and 39% said conditions were still poor.

The news helped lift the stocks of most of the publicly traded builders. PulteGroup (PHM), Lennar (LEN), DR Horton (DHI) and KB Home (KBH) were all up between 2% and 4% in early trading Wednesday. Prices of builders’ stocks have more than doubled on average already this year.