To start the year, we want to report on the Home Price Expectations Survey, which is a nationwide panel of over a hundred economists, real estate experts, investment and market strategists that look at the housing industry to consider where prices are going as we move forward.

The theory on this is very simple. If you survey over a hundred people, you’re going to get some bulls, some bears, some people really aggressive about what’s going to happen in the housing market and some people thinking that the sky is falling. For the survey, these diverse opinions are then mashed together to get the numbers we are going to report on below. The example I like to use is this: if you put a jar of jelly beans in the front of a room with a hundred people in it, and you ask each person to guess how many beans were in the jar, some guess way too high, some guess way too low. But if you averaged out all their answers, chances are you’d come real close to the number of beans in that jar.

The same principle applies with the results of the Home price Expectations Survey. 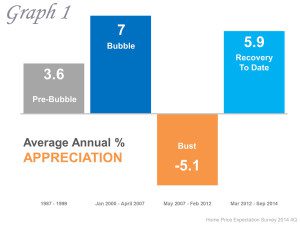 Let’s take a look at what they found. To put this in perspective, it’s important to take a look at where appreciation and depreciation have been since 1987. Prior to the bubble from 1987 and 1999, the normal appreciation was about 3.6% annually. During the bubble years, those seven years from January 2000 to April 2007, that number almost doubled to 7%. During the five years of the bust, prices were dropping 5% a year. But now, since the March 2012 recovery, (which is when prices started to turn), we’re up 5.9%. So again, that gives you a little historical context to pricing. (See graph 1) 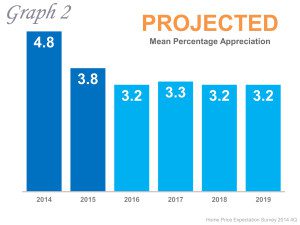 Next, let’s take a look at prices going forward. According to the Home Expectations Survey, the belief is that we will be up about 4.8% in values from last year.

Going into 2015, the survey results assert that over this year, prices will increase 3.8%. Then, going forward, they’ll still be over 3%, much like the normal historical average before the bubble. This is expected to continue all the way to 2019. (See graph 2)

What does this mean to you? Well, two things.

If you’re a buyer, you don’t have to worry about the headlines that say prices are falling. These headlines are somewhat misleading. The acceleration of the appreciation is slowing, but prices are not falling.

If you’re a seller thinking you’re going to hit a home run, and you’re waiting to hit that home run until the year prices are going to go up 20%, you may want to reconsider. According to the experts, the 20% increase is not going to happen anytime soon.

What the experts have done is accumulate the numbers from today all the way to 2019, and we can look at this data in four different ways. (See graph 3) 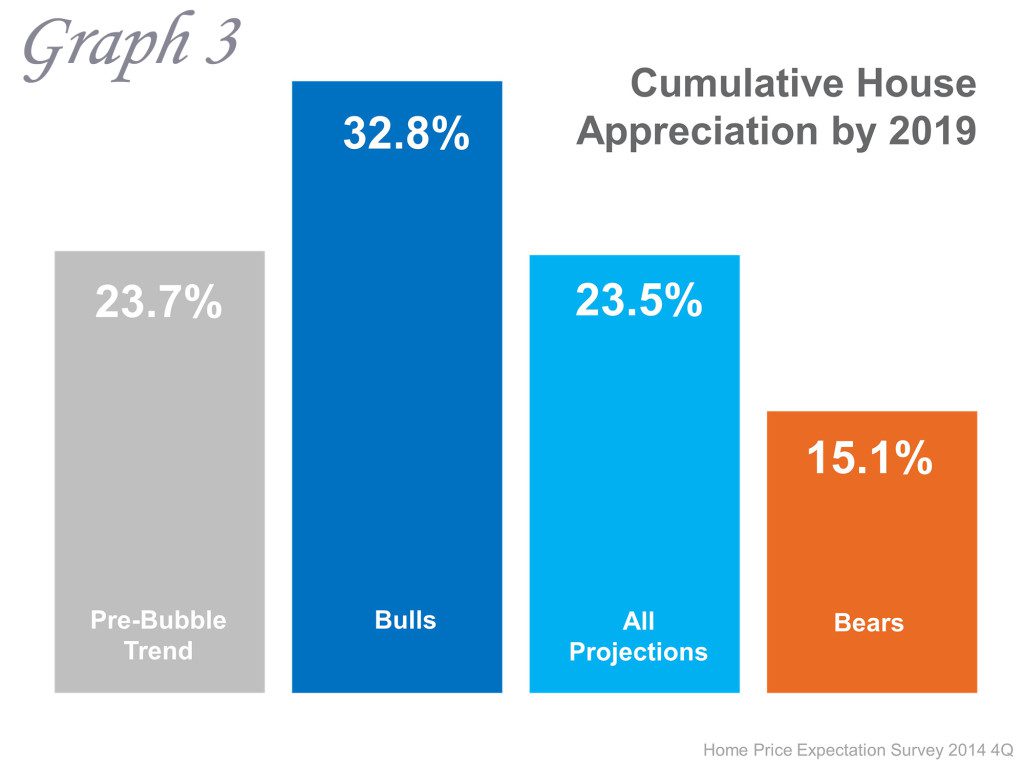 First, if we look at a ‘pre-bubble’ trend line (meaning if there never was a bubble, or crash, and the line just kept on going at the pre-bubble 3.6% increase from now until 2019), prices would be up about 23.7% from where they are today.

The bulls (the most optimistic and aggressive of those 100+ experts), which represent the top one‐quarter of survey respondents, believe prices are going to go up 32.8% over the next five years.

When you look at the data for ‘all projections’ it is very close to what the ‘peak bubble’ trend would be, about 23.5%. Basically taking the average of all 100+ experts.

Even the bears (the most pessimistic bottom quartile of those 100+ experts) still think that prices are going to go up 15.1% over the next five years.

What is important for us to understand is that the market is turning. In fact, it has already turned very substantially as far as pricing is concerned. So, anyone purchasing a house right now can feel very, very confident that they’re making a good investment, at least over the next five years. Additionally, anyone looking to sell can now have some confidence that, according to the experts, the growth trends will continue.