A Brooklyn real estate company has offered employees one of the nuttiest pay incentives we’ve ever heard of –– get a tattoo of the company logo and get a 15% raise.

Anthony Lolli, founder of Rapid Realty, came up with the idea after doing business with a tattoo artist last year, ABC News reports.

Lolli got a tattoo of the company logo afterward and decided to give employees an incentive to do the same.

So far, at least 40 employees have taken him up on the offer. One brave employee, Robert Trezza, had only been working at the 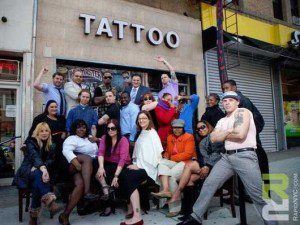 company for a month.

“My wife was a little concerned, but I said you know what, it was the best commitment that I could think of,” he told ABC2 News.

Honestly, we can’t blame these guys for taking the bait in order to put more cash in their pocket. The latest job market report wasn’t that great and employee compensation has hardly kept up with the rising prices of fixed costs like health care and housing.

On the positive side, Lolli also offers 15% raises to employees who do a certain amount of charity work, reach certain work-related goals or mentor other workers.

Although this all might sound a little ridiculous, at least the logo isn’t all that awful. It’s fairly discreet — two connected Rs in gray and green with the Rapid Realty name. Workers have gotten the tattoos in various places, from their arms to ankles to backs.

Hopefully they plan on working for Rapid for some time. It costs upwards of $500 a session for laser tattoo removal, and it usually takes several sessions to complete the job.

Lolli’s not the first to float the idea of getting tattoos as a form of company bonding. Jane Pratt, the editor of xojane.com, suggestedlast year that her staff all get matching XO ink to celebrate the company’s success.