A founder of a website dedicated to direct sales of homes by their owners has sold his two-bedroom apartment in Chelsea for $2.15 million—with the help of a real-estate broker and a standard 6% commission. 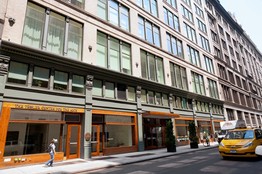 Colby Sambrotto, a founder and former chief operating officer of ForSalebyOwner.com, a large website for owner sales, spent six months trying to sell his condominium himself through online listings and classified ads, before turning over the listing of the 2,000-square-foot apartment to a broker at Bond New York in November.

The broker, Jesse Buckler, said he told Mr. Sambrotto the apartment in the Lion’s Head building on West 19th Street near Sixth Avenue was priced too low and wasn’t drawing the right buyers.

By May, it went into contract, he said, after attracting multiple offers. It closed in the last few days for $150,000 more than the original asking price.

“At first he wouldn’t let me increase the price,” Mr. Buckler said. “I told him I know what I am doing—the market is picking up.”

The sale is likely to add some fuel to debate over whether direct for-sale-by-owner deals, known as FSBOs in the trade, are workable in the higher end of the Manhattan market, where many brokers try to hold the line on commissions and resist discounting.

There have been a handful of extremely expensive sales that closed in the last few years, without the help of broker. In 2007, Edgar Bronfman Jr., the chief executive of Warner Music Group, sold a townhouse on East 64th Street for $50 million without a broker. Last month, a townhouse on East 69th Street off Fifth Avenue was sold for $48 million, also without a broker commission.

ForSaleByOwner.com was founded in 1999 and sold to Tribune Co. in 2006 in the midst of the real-estate boom. Mr. Sambrotto left the company when it was sold, and in 2007 paid $2 million for a second-floor apartment at the Lion’s Head, a successful condominium conversion where buyers lined up for a chance to buy in 2005.

Mr. Sambrotto confirmed the details of the transaction with Mr. Buckler as the broker. He said he is still active in real estate and still believed in owner sales and discounted commissions.

Looking to move his family to the suburbs, he said he carefully staged his apartment for sale himself, and put it on the market. But after using a mix of websites to publicize his apartment, he said he had only “middling success” and switched to a broker because many buyers were so reliant on brokers.

“The apartment market in Manhattan was tightly controlled by agents,” he said. “So many buyers don’t even bother to do a search online.”

Now Mr. Sambrotto said he plans to use his condo-selling experience with a new sale-by-owner website, USRealty.com, that he plans to launch in a few weeks after a non-compete agreement expires. Owner-sellers on the site will have the option of offering commissions to brokers who bring in buyers.

Matt Brown, director of business development for ForSaleByOwner.com, said selling without a broker “is definitely not for everybody.”

“It is a time-intensive process that can save you a ton of money,” he said. But even so, “In the high-end market the sellers might not have the time to dedicate to selling” their homes themselves, he said.

Bruno Ricciotti, a founder and principal broker at Bond, had a different perspective. “FSBOs are a significant source of leads for us,” he said, since brokers are trained to use the owner listings to sign up new customers.

After looking for houses across the region, Mr. Sambrotto said he and his wife had decided to stay in the city, and to buy a second home on the East End of Long Island.

Photo: Ramsay de Give for The Wall Street Journal

Article by: The Wall Street Journal