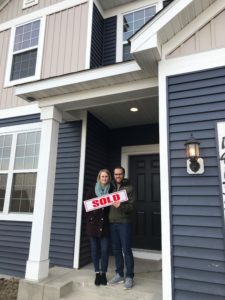 Amber and Chad are originally from Minnesota and wanted to move back home after living in Nebraska while Amber finished medical school. They really wanted to be closer to their parents and raise their growing family in the Plymouth area. After looking at several homes, they discovered they could build a new home for the same price as buying an existing home. They decided they really wanted to explore new construction. After visiting with several new construction home builders in Plymouth, they narrowed down their options to the Camelot Nine development by Pulte. They really like how close it was to their parents and the new pre-school that had recently opened at their church. They were very excited to select the finishes, floor plan, and to customize their new home exactly the way they wanted. The hard part was waiting… while their home was being built, they were living in their parent’s basement with two small children. Finally, the big day arrived, and they could hardly wait to move into their brand-new home and have their own space again!

Congratulations Amber and Chad! I have really enjoyed getting to know you and working with your family! It’s great to have you back home in Minnesota!