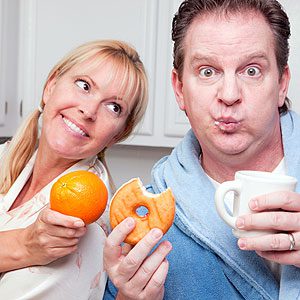 When I first met my hubby, he ate most of his veggies fried, drank soda like it was water, and weighed about 50 pounds more than he does now. Because I was already in private practice as a nutritionist, I knew that the best way to help him be healthier was not to bribe, trick, beg, or bully him into changing. But not everyone is in my line of work. So I’ll help you out: Whether you’ve just started a relationship with someone who has unhealthy habits or your long-term partner has packed on a few pounds, these five phrases should never cross your lips. I’ll tell you why, as well as what to say (and do) instead, to help your significant other get healthy—without wrecking your relationship.

Even if it doesn’t seem like it, I guarantee that your partner is aware that they’ve gained weight. Over the years, I’ve had many clients tell me that they knowingly wore too-tight clothes (or bought bigger ones), without ever broaching the subject with their spouses, because they just weren’t ready to face the issue. Also, the weight gain may not really be about food. Barring a health issue, like a thyroid problem, an increase in size is often a side effect of emotional eating. So if your partner has put on weight, they may be turning to food to cope with something else that’s going on. Rather than bringing up the weight, just ask, “Are you OK?” Many of my clients stopped using food as a crutch once they started to communicate openly with their partners and and got the emotional support they needed, but weren’t able to ask for.

“You shouldn’t be eating that.”

Even if your mate really didn’t know that chocolate covered pretzels aren’t exactly the healthiest snack, pointing it out implies judgment, which feels awful coming from a romantic partner. I’ve counseled couples who stopped having sex, then stopped talking to each other, because one began patrolling the other’s diet, which led to hurt feelings, anger, and resentment. The best way to help is not to point out what your partner is doing wrong, but instead consistently and casually offer healthy options in a non-judgmental fashion. When my hubby and I met, there were many healthy foods he’d never tried, like hummus and roasted Brussels sprouts. But when he liked the items I offered, he began eating them regularly, without me having to push. Even just making healthy foods accessible can help a lot, like placing a fruit bowl on the counter top, or putting ready-to-eat fruits and veggies in clear containers on the top shelf of the fridge.

“Haven’t you had enough?”

Sometimes a client will tell me that they’ve asked their spouse to help them lose weight by stopping them when they’re overeating. Other spouses volunteer for that position without being asked. In either case, this tactic typically backfires. Monitoring portions tends to lead to the same anger tied to policing “bad” foods, and can often lead to secret binges or purposefully overeating when the bullying partner isn’t around. So even if your partner asks, don’t agree to take on this role. Instead, try practical ways to curb portions, like using smaller plates, breaking up leftovers into single, smaller servings, and reducing portions of starchy foods like whole grain pasta and rice and displacing them with more veggies. These strategies tend to lead to naturally eating less. You can also become the pacesetter when you eat together. Without saying a word, consciously eat more slowly. We tend to mimic the pace of the people we eat with, so if you slow down, chances are your partner will, too, and studies suggest that eating slower can help curb mindless overeating.

While some people can manage their weight pretty effortlessly, it’s a real struggle for others. The truth is, weight control is a lot more complicated than calories in, calories out, or eat less, move more. Plus, what works for one person may not work for another. For example, some of my clients love tools that help them track what they’re eating, while others loathe them. Some do better with repetition, others need variety. And some can treat themselves without triggering a binge, while others can’t. Rather than trying to school your partner in what works for you, try to examine what works for them. You might even ask, “Is there anything I can do to support you?” When you start to see things through your partner’s eyes, you may find that the view is very different.

In my experience, food cops really aren’t trying to be bullies. In most cases, policing does come from a caring place. But regardless of your intentions, it’s important to see how your words and actions make your partner feel. At some point in your life, you’ve probably had a teacher, coach, caregiver, or boss who constantly looked over your shoulder. Even if it’s well-intentioned, this kind of scrutiny just doesn’t feel good, especially when we’re adults. So rather than trying to justify being a food cop, learn to let go. Make peace with the fact that your significant other is responsible for their own behavior and that there’s nothing you can do to make them change, even if you think it will save their life. Instead, start directing your energy toward being a healthy role model, and trying out my suggestions above. Your partner is much more likely to respond, and you’ll immediately unburden yourself and your relationship.